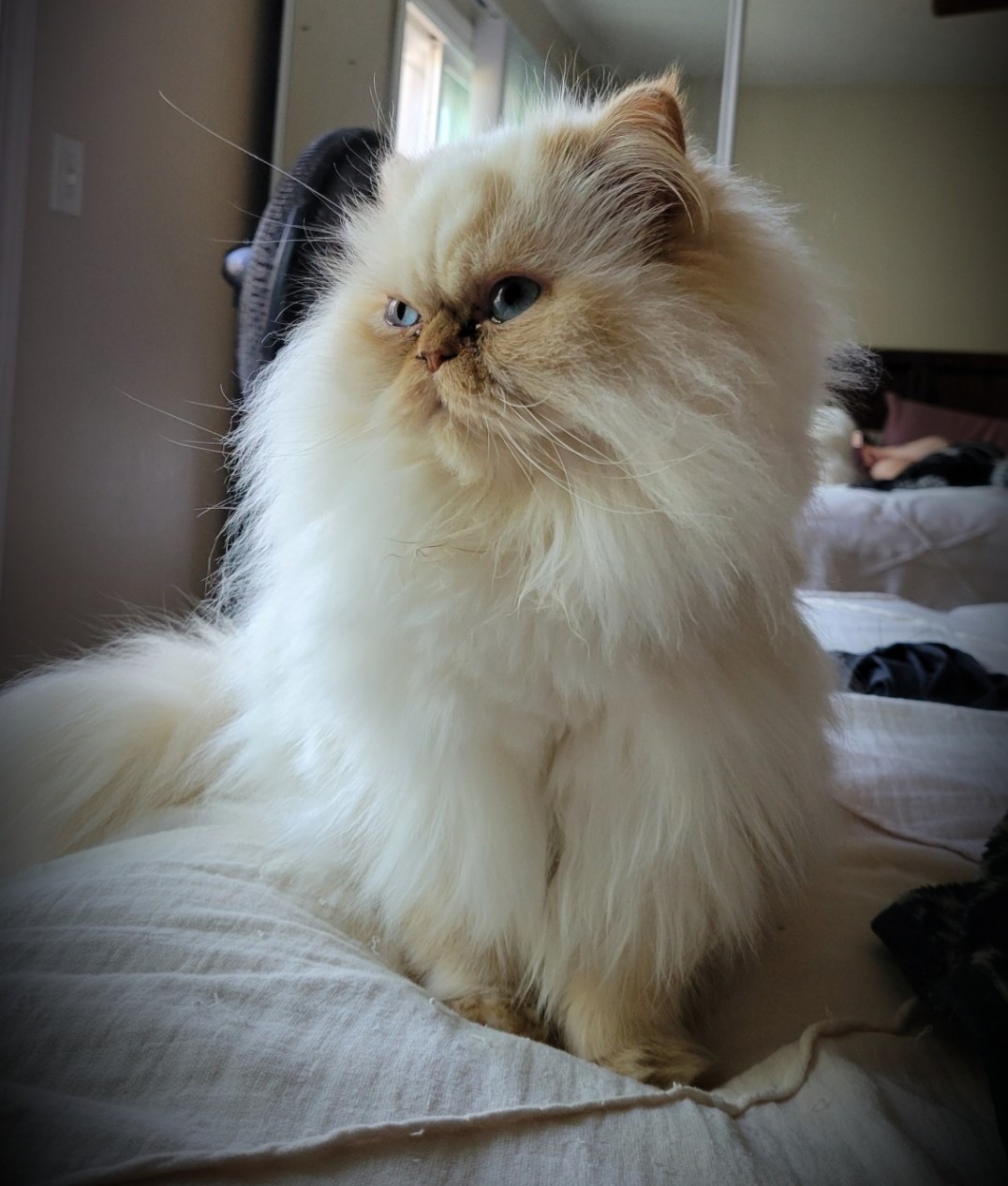 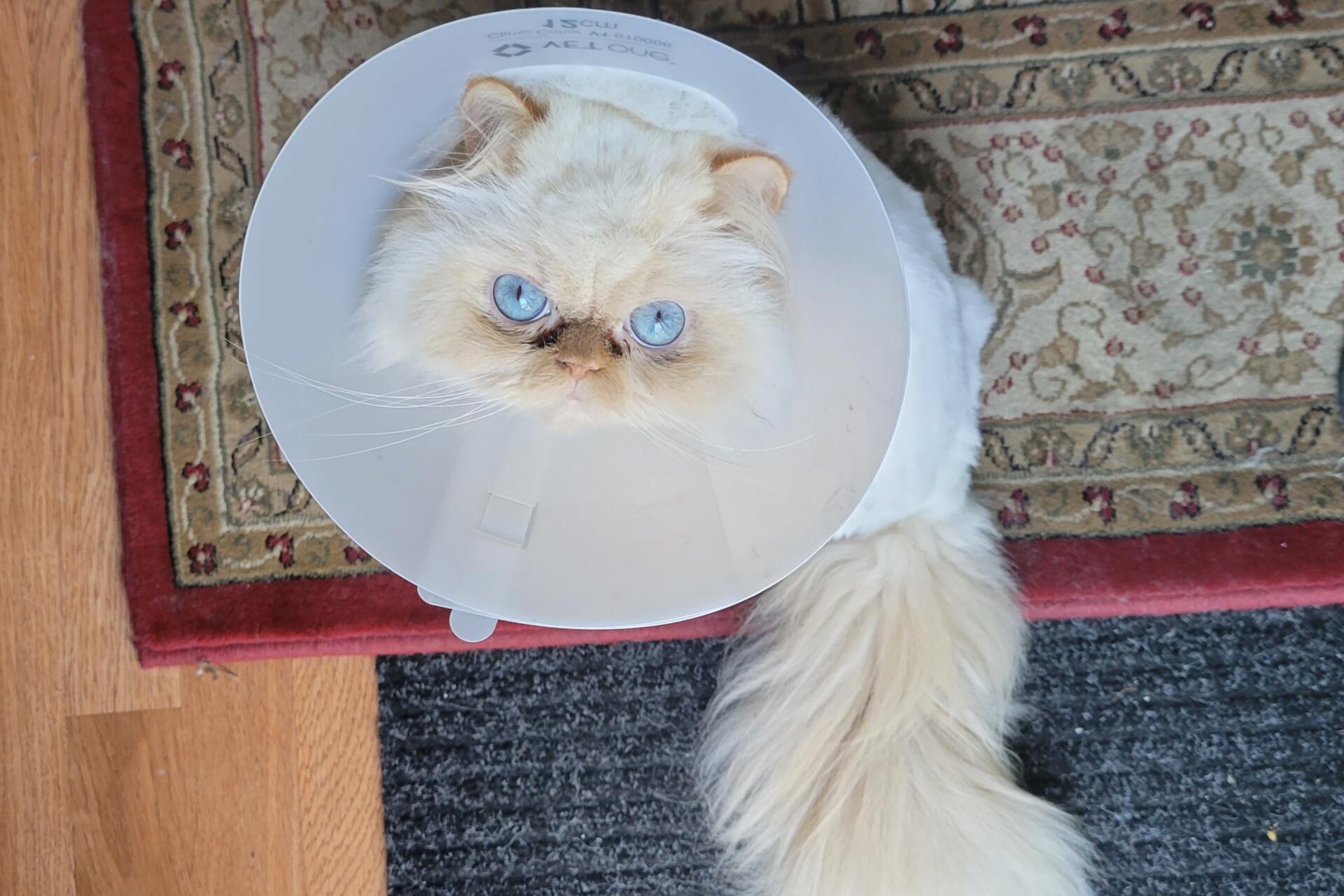 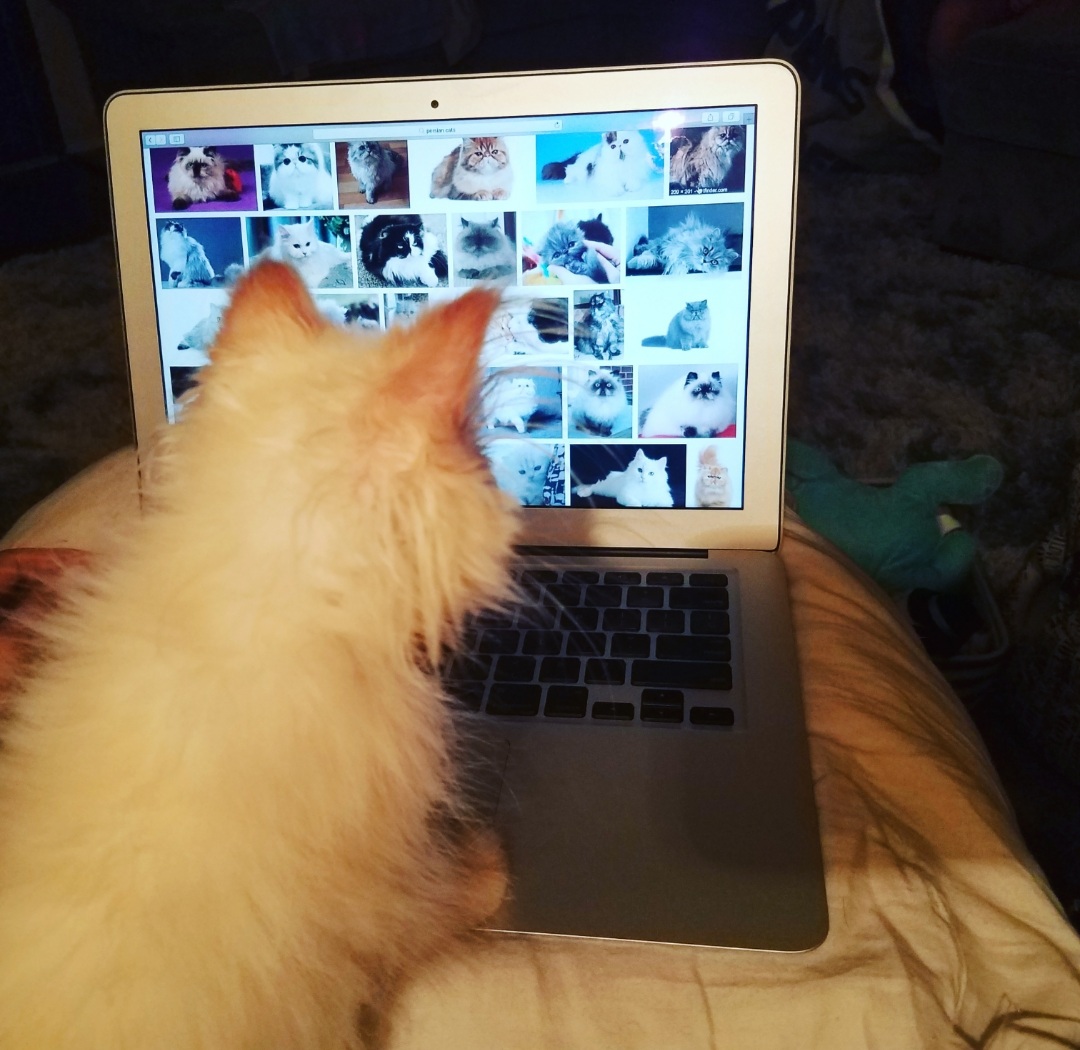 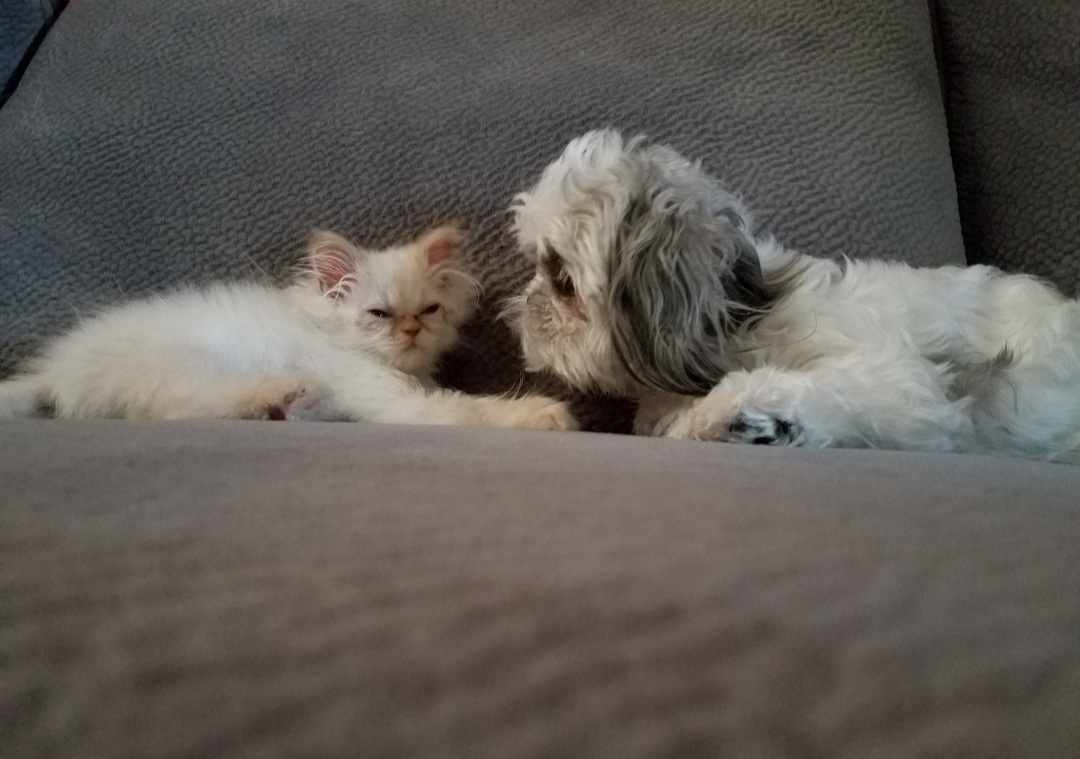 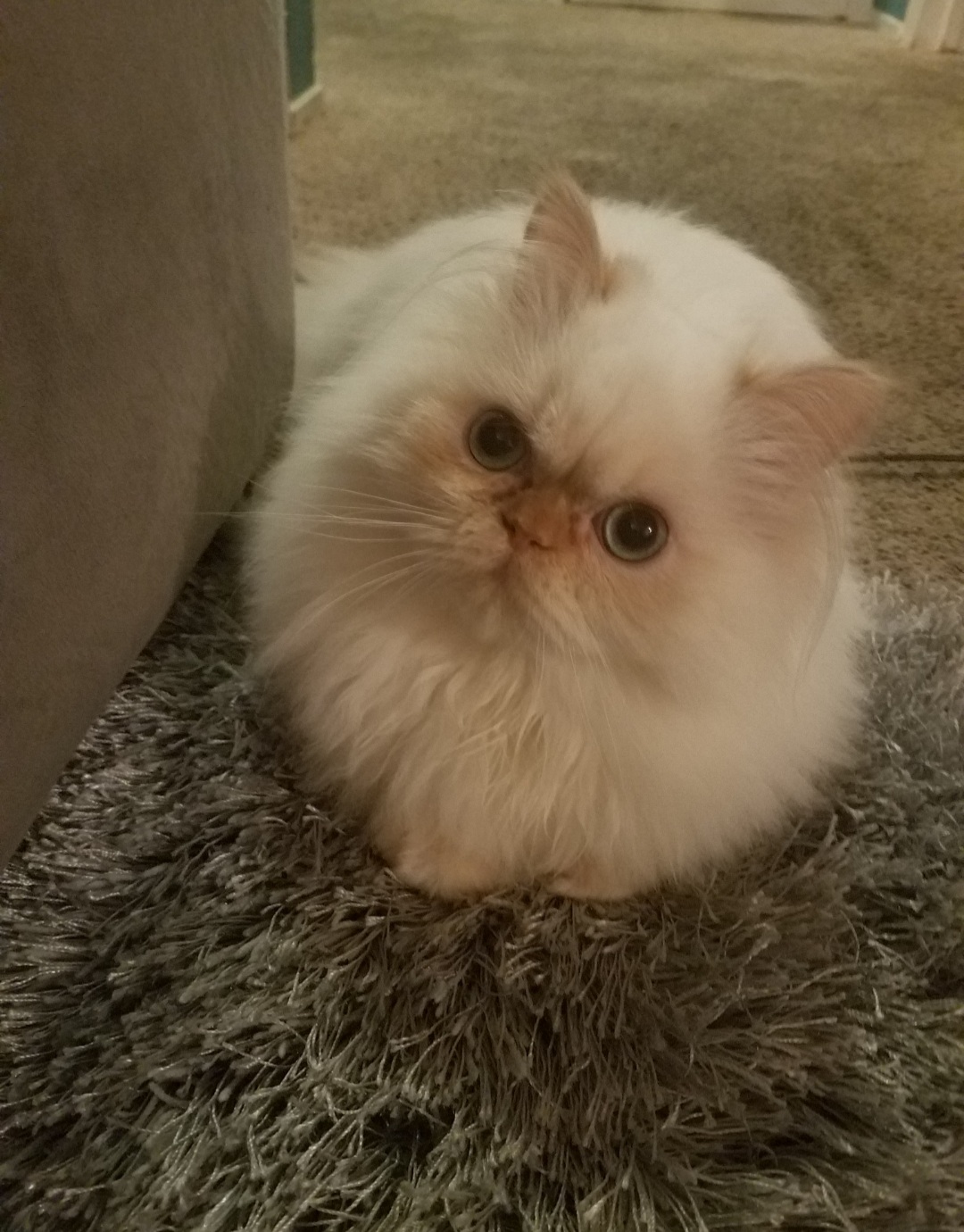 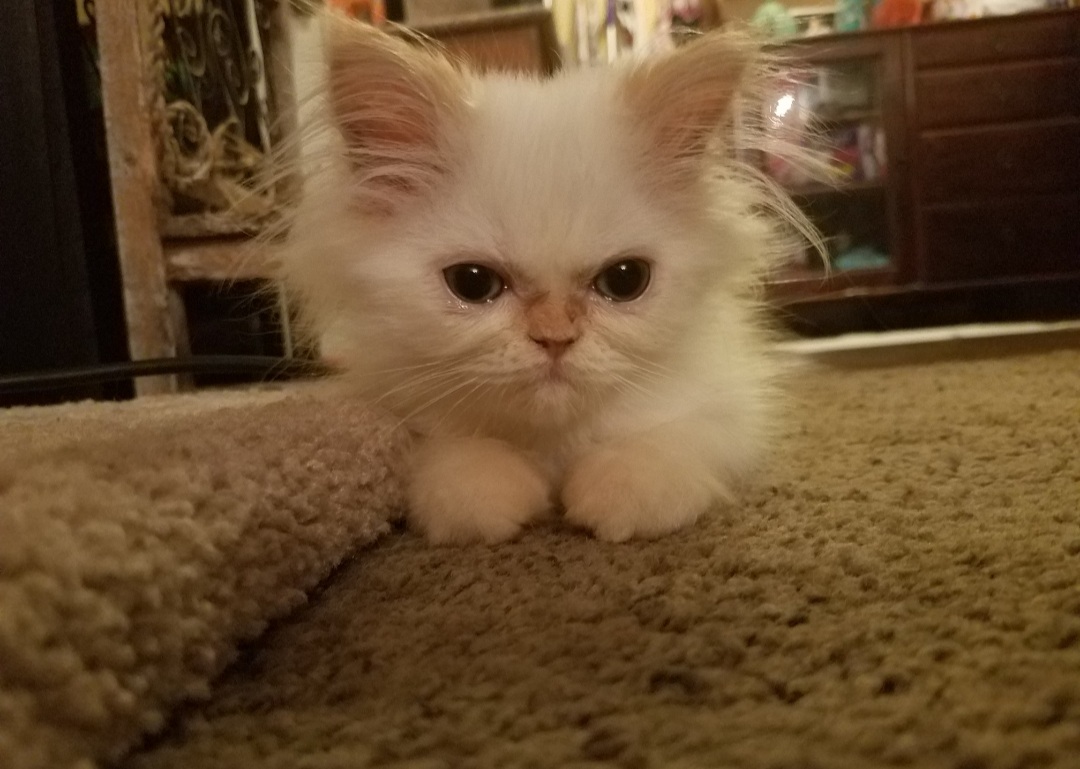 Meet Mr. Purrfect! Mr. Purrfect is a 3-year old male neutered Persian who couldn’t urinate. He had surgery at SAGE Dublin for a perineal urethrostomy (PU). If you recall, our other feline grant recipient, Boots, had the same surgery done in May and he is doing so well! You can read more about Boots’ story on this page.

Jessica, Mr. Purrfect’s mom, noticed he was lethargic, not eating, and going in and out of the litter box several times. Despite Mr. P’s attempts, he was not producing any urine. This had happened once last year and Jessica knew Mr. P needed to get to a veterinarian right away. Urinary obstructions are medical emergencies and are fairly common in male cats. The urethra becomes inflamed and blocked with debris such as mucus, crystals, or stones. The SAGE Dublin team stabilized Mr. Purrfect, as his kidney enzymes were elevated due to his body not able to filter out waste. Mr. Purrfect’s emergency doctor, Dr. Lynne Morris, helped connect Jessica to SAGE Compassion for Animals. We were happy to provide a grant for Mr. Purrfect! Dr. Jennifer Ree performed a perineal urethrostomy (PU) surgery, which widens the urethra to prevent further blockages.

Jessica wrote us to give some history on how this handsome man came into her life:

At 7am on July 25, 2017, I let out my rescue dog Kobe to potty in the backyard. On the other side of my fence is a creek. When I opened the door to let Kobe in, following behind him was a little white furball. The furball casually waltzed in and I heard a small meow. I’ve never owned a cat, and in fact, was allergic to them. I had no idea what it was or what to do with it. My kids fell in love, and both my dogs took to him very well. Once my veterinarian opened 2 hours later, I took him in hoping they would know what to do. He had a little cough and his eyes looked infected. I was told they couldn’t take him and recommended that I take the kitten to a shelter. I didn’t know what his fate would be at a shelter, and I didn’t have the heart to do it. I asked the veterinarian to check him out, and I agreed to be responsible for the bill. I left Mr. P in hospital while they attended to him. I went out and bought whatever I thought a cat would need: litter box, toys, bed, treats, and food. I STILL had no intention of keeping him. I received a call an hour later. Mr. P was ready and his vet bill was almost $400. He had an upper respiratory infection, an eye infection in both eyes, and fleas. I was given his medications and we were sent on our way. My initial plan was to nurse him back to health and find him a new home. That obviously didn’t happen. He had our hearts during those first 2 hours after he walked into our home.

We are so thankful to our donors and veterinary partners who make our work possible. Jessica and her family have already set up a recurring donation to SAGE Compassion for Animals. When speaking with Jessica about Mr. Purrfect’s grumpy expression, she said, “I swear he’s smiling! You saved my baby’s life.”